How can alarm motivate us to take climate action? Lessons from journalist David Wallace-Wells

How can alarm motivate us to take climate action? Lessons from journalist David Wallace-Wells

Are you alarmed about climate change? Good. According to David Wallace-Wells, you should be.

On Wednesday, Oct. 16 the award-winning author and deputy editor of New York Magazine shared this message with a crowd of nearly 600 students, faculty, staff, and community members in Brendle Recital Hall. Much like in his 2019 New York Times bestselling book, The Uninhabitable Earth: Life After Warming, Wallace-Wells did not shy away from the grim truths at hand when he addressed the full house sitting in front of him.

“What stands before us a challenge of not only incomprehensible scale, but also undeniable urgency,” he said.

Wallace-Wells’ rounded out his time on stage with a moderated Q&A with Justin Catanoso, Professor of Journalism at Wake Forest and a career journalist with 30 years of experience covering climate change, health care, economic development and travel.

Wallace-Wells’ keynote lecture came at a timely point in the local, national, and global climate change conversation. September 20 – 27 marked climate week 2019, a seven-day grassroots movement that inspired young people in over 150 countries to organize local strikes calling for action in the face of the climate crisis. The Wake Forest student-led climate strike was just one of many that united a total of nearly 7.6 million people internationally in the cry for urgent climate action.

In the month leading up to Wallace-Wells’ visit, two groups of intermingled students, faculty and staff held book club discussions about The Uninhabitable Earth. While on campus, Wallace-Wells met with the 2019 Wake Forest Fellows for a lunchtime discussion about journalism and ways to tell the story of climate change. Later in the afternoon, he engaged separately with a small group of faculty and a group of undergraduate students passionate about climate change and science communication.

“In both of them I walked away feeling more empowered than I expected,” she said. “Since then, I’ve been trying to reflect and find out exactly where that feeling came from. And I think it’s actually in the ugly truth of where we are. He reminded us that the silver lining is that we have the same amount of power to reverse it.”

Recent weeks have been chock-full of young people and political candidates alike hoping to do just that.

During his keynote lecture Wallace-Wells noted the changes he’d seen in the political sphere over the past year alone. When he was finishing The Uninhabitable Earth in the late fall of 2018, he had never heard of Greta Thunberg. Most of the world had not either.

“I think if you look at the democratic field you see a lot of progress,” he said. “These candidates are putting forward plans that are much more ambitious than anything that had been taken seriously even just a couple of years ago.”

Wallace-Wells is realistic about the barriers that make it difficult to drawdown carbon emissions from the atmosphere. But he doesn’t see them as insurmountable.

“The fact that the fight is going to be really hard isn’t an argument against engaging,” he said. “Its an argument for engagement.”

Engagement in climate change solutions is a priority of the university. Wake Forest is actively working to develop a plan for climate neutrality that builds off of the momentum created by the 30% reduction in the university’s greenhouse gas emissions since 2007. You can read about our publicly available carbon inventory and how we measure the university’s greenhouse gas emissions here. If you are interested in how we’ve reduced energy intensity through investments in energy efficiency or our renewable energy opportunities and obstacles, click here.

Transportation and Inequity in Winston-Salem 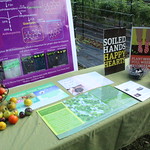