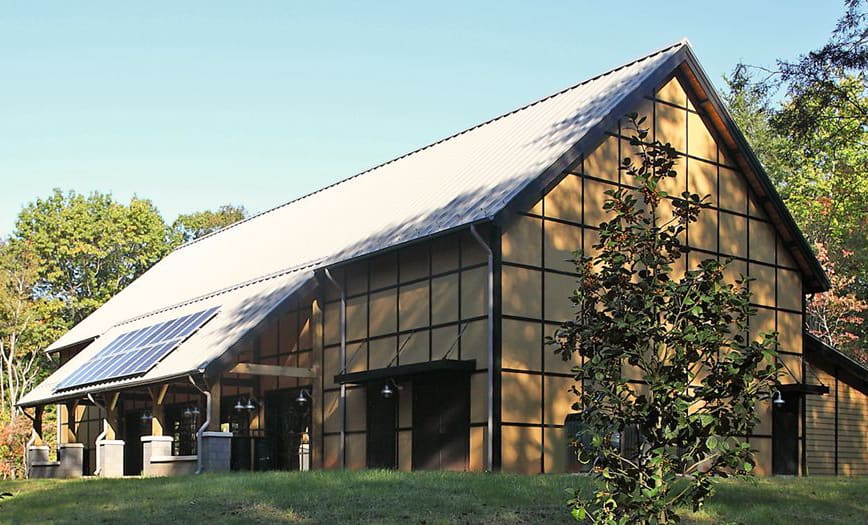 This is the last installment in the Office of Sustainability’s Drawdown series. In the previous weeks, we have examined how Wake Forest is working to adopt, demonstrate, and research 25 of the 80 Drawdown solutions. For updates on WFU research initiatives and campus-led initiatives, follow the links.

This piece focuses on solutions initiated by Wake Forest’s Facilities and Campus Services and Environmental Health and Safety teams. It is important to note that this area includes Drawdown’s number one solution—refrigerant management. The complete list of solutions initiated by Wake Forest’s environmental compliance and facilities management teams include:

Materials: Common Techniques and Technologies to Close the Loop

Refrigerant management is the top Drawdown solution. So, what is refrigerant management, and why is it important? Every refrigerator and air conditioner in existence contains chemical refrigerants that allow us to keep things cool. Up until recently, refrigerants such as chlorofluorocarbons (CFCs) and hydrofluorocarbons (HFCs) were key culprits in in depleting the stratospheric ozone layer. Upon discovery of their damaging effects, CFCs and HFCs were slowly phased out. Nevertheless, refrigerants continue to cause problems for our planet. Ninety percent of refrigerant emissions are created at the point of disposal, and without proper management of refrigerant waste, resultant emissions can be detrimental. In 2016, officials from more than 170 countries enacted the Kigali Deal, a mandatory agreement with specific targets and timetables for phasing out HFCs. It is estimated that the accord will reduce global warming by nearly one degree Fahrenheit. With the Kigali Deal in place, as well as additional safety measures for managing existing refrigerants, we may draw down carbon emissions by nearly 90 gigatons.

How does Wake Forest play its part in refrigerant management? Mike Draughn, Director of Maintenance & Utilities Services with Facilities & Campus Services (FACS), says that FACS partners with the university’s Department of Environmental Health & Safety to administer an all-encompassing, campus-wide program. “Basically, campus is treated as a giant balloon, and we try to measure any escaped refrigerants given both type and asset—the equipment from which it came.” Draughn states that FACS works to quickly identify and fix or replace any equipment that has a refrigerant leak or is at the end of its life. When appliances are discarded, refrigerant is either sold back to the installing contractor and reclaimed (for large items such as chillers), or is removed on campus and collected in warehouse recycling containers (for smaller equipment). “We always report a draw or deposit of inventory on any refrigerant that was either used or recycled and added to refrigerant storage in our warehouse. In terms of replacing and renewing appliances, we update and choose equipment based on a review of the most current, efficient, and environmentally-friendly refrigerant options.”

Wake Forest is also committed to Drawdown solution number 46—home water saving. If 95 percent of taps and showerheads are converted to low-flow options by 2050, we would avoid 4.6 gigatons of carbon emissions. According to Doug Ecklund, the Building Systems Manager for WFU FACS, we have seen a 45 percent increase in water savings as new buildings on campus are renovated and equipped with low-flow shower and water fixtures, as well as dual-flush toilets.

Energy: Planning for the Transition

One technology with which many are familiar is rooftop solar. First tested in 1884, solar capture technologies have become mainstream over the years and have seen increases in both affordability and effectiveness. If rooftop solar can grow from 4 percent of global electricity generation to 7 percent by the year 2050, we can avoid 24.6 gigatons of carbon emissions. There are several demonstrations of solar photovoltaic (PV) technology on campus: on the Barn, Reynolda Gardens greenhouse, and North Dining. To make a meaningful transition to solar PV, Wake Forest would need about 20 acres of panels. A changing regulatory environment in the state might release some of the current constraints on this transition.

Solar energy can also be used to heat water. Creating hot water for showers, washing dishes, and cleaning laundry makes up 25 percent of residential energy use worldwide. If solar water heating grows from 5.5 percent to 25 percent by the year 2050, we can draw down carbon emissions by 6.1 gigatons. This is currently the most cost effective application of solar technology on campus. South Hall’s water is heated by solar. Additionally, in phase three of the Reynolds Gym renovation, solar will be installed as a source of heating for the water for the pool.

In terms of regulating the temperature of buildings in urban spaces, district heating is the way to go. Rather than having small heating and cooling units in each building, district heating entails funneling steam and/or chilled water from a central plant across a network of pipes to a variety of different buildings. By replacing stand-alone water and space-heating systems that currently exist with district heating techniques, we could draw down carbon emissions by 9.4 gigatons by 2050.

John Shenette, Wake Forest’s Associate Vice President for FACS, believes that the WFU campus is a great example of district heating. From the main Facilities plant, steam and chilled water are distributed to campus buildings through underground ducts to heat and dehumidify, through cooling, indoor spaces. “Wake Forest has invested a good deal of money into improved automation and controls,” says Shenette, “And for good reason—district heating and cooling is much better than individualized units in terms of efficiency.”

Building automation systems (BAS) are becoming very common in the commercial sector. In a building with a BAS, a centralized, computer-based “brain” monitors and controls all mechanical functions in order to operate under the greatest level of efficiency and effectiveness. If BAS usage expands from 34 percent of commercial floor space to 50 percent by the middle of the 21st century, we could draw down 4.6 gigatons of carbon and generate a large savings in operational costs. BAS exist in most campus buildings here at Wake Forest. The campus makes great use of occupancy sensors that adjust lighting and control heating and cooling by detecting the presence of someone in a room. There are also sensors to determine bathroom exhaust fan speeds according to occupancy and to detect the need for certain amounts of hot water. Over the past few years, the implementation of such controls has resulted in a 20 percent decrease in electricity usage on campus.

One efficiency solution that is easily recognizable from residential buildings and other locations across campus is LED lighting. LEDs, or light-emitting diodes, convert electrons to photons and use 90 percent less energy to emit the same amount of light as an incandescent bulb. In addition, LEDs have an extremely long life—27 years if turned on five hours per day. It is assumed that LEDs will become standard by 2050, replacing less-efficient bulbs and avoiding 7.8 gigatons and 5 gigatons of carbon in households and commercial buildings, respectively. LED lighting exists across the Wake Forest campus. According to Shenette, there are upwards of 1,000 LED fixtures both indoors and out.

From full renovation of residence halls on the upper quad to routine replacement of ordinary appliances, Drawdown solution number 80, retrofitting, is highly visible across campus. Retrofitting—updating existing buildings by installing better insulation, more energy-efficient features in the “envelope” like windows and roofs, and upgraded management systems—is taking place all around campus. “A great example of retrofitting is the Reynolds Gym,” says Shenette. “Rather than creating a brand-new building, we converted the bones of the original gym, revamped and reengineered everything with more efficient structural, electrical, and mechanical infrastructure. The same thing is also happening right now with the Salem Hall renovation. It’s incredibly innovative.”

Want to learn more about how you can play a part in Project Drawdown to reduce GHG emissions? Join us for a public lecture by Dr. Katharine Wilkinson, the senior writer of Drawdown, on October 5 in the Byrum Welcome Center starting at 6:00 pm.