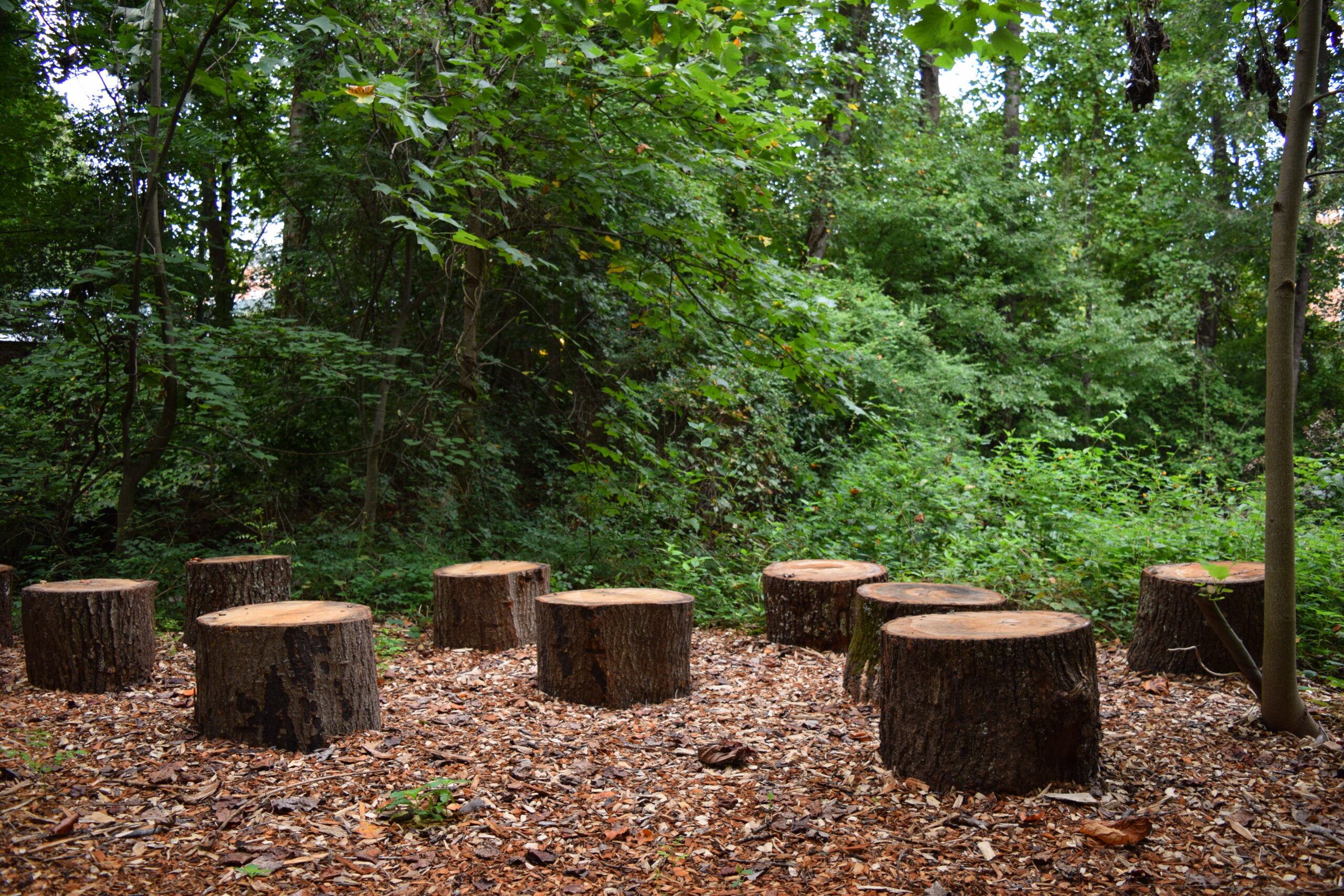 The Cherokee Garden Project began in 2008 with a goal of transforming a stormwater management system behind Angelou Hall into a haven for native plants, especially those important to the Cherokee. The garden was opened in 2010 with a Native American blessing of the space. The Cherokee phrase “nvwotohiyada awisvni” was given to the space, meaning that it exists in a continued state of biological wellbeing. Named Tohi,  the Cherokee word meaning wellness, unstressed, or peaceful, this garden space is designed with the Wake Forest community in mind. Since the project’s inception, the hope of creating a meditative learning environment for students, staff and faculty was a priority. In 2021, Community Garden Intern Sakina Barthe-Sukhera (‘22) revitalized the garden through the introduction of new native plants and removal of invasive ones, and the creation of an outdoor classroom made with tree stumps sourced from campus. The garden’s peaceful nature inspired the Rooted project, a collaboration between the Office of Sustainability and the Office of Wellbeing, which created a sit spot in the garden with a wooden QR code linking to self-guided poetry, mindfulness exercises, and an ecology guide to the garden.

Last year, the Tohi Garden inspired the annual Tohi Talks event series, a collaboration between the Intercultural Center and the Office of Sustainability, for Native American Heritage Month. Tohi Talks are facilitated, contemplative conversations set in the classroom space of the Tohi Garden that are open to the entire campus community. Each talk highlights Indigenous leadership and knowledge along with interdisciplinary subjects like environmental justice, settler colonialism, gender in/equality, and protecting the futures of Indigenous communities. This year, four separate talks were developed in collaboration between the Intercultural Center, Office of Sustainability, Environmental Program and Women’s Center.

The first Tohi Talk, titled “Land protectors and conviviality in Latin America”, was led by Dr. Julie Velásquez Runk, director of the Environmental Program and focused on Central American land protectors. In Spanish, the word “conviviality” is often used as a short-hand to describe living well with others, including those of multiple ethnic groups, plants, spirits, and animals. It also has been adopted by academics in “convivial conservation,” as a means to re-think and  decolonize environmental conservation efforts. In this conversation, Dr. Velásquez Runk discussed her over twenty years of work with Indigenous Wounaan authorities, scholars, and community members in eastern Panama on conviviality focused on forests, language, and Indigenous land rights. She also shared the children’s book, “An Adventure of Wounaan Children and Many Birds“, that she and colleagues published in 2021 that honors Wounaan lifeworlds and their everyday convivial relationships with birds.

The second talk, aptly named “Should We Go to Hawaii?”, was led by Savannah Baber, Assistant Director of the Intercultural Center and centered on the Kanaka Maoli of Hawaii and their call for the end of current tourism systems to the Hawaiian islands. The Kanaka Maoli made this demand in hopes of protecting their islands and conserving natural resources, as well as calling for respect and acknowledgement for the sovereignty of the Kingdom of Hawaii. In this conversation, participants engaged in dialogue which centered the Kanaka Maoli’s cultural and spiritual connections to their land and ocean, unpacked political understandings of Hawaiian sovereignty in relation to American statehood, identified the environmental issues creating a state of emergency across the islands, and explored the history of American colonialism in the Pacific. The discussion culminated in contemplation of the question posed in the talk’s title: Should we go to Hawaii? Should Americans reroute their vacations?

Savannah Baber co-led the third Tohi Talk, titled “No More Stolen Relatives- Reclaiming Our Bodies and Land”, with Mahlea Hunt (‘23) and Shelley Sizemore, Director of the Women’s Center. The facilitators began this talk with a discussion of the Indian Child Welfare Act (ICWA), highlighting its origin, intent and acknowledgement of tribal sovereignty, and the current Supreme Court case centered on its potential removal. This topic was tied to the violence and trauma of the former residential school systems for Indian children in Canada and the United States, which kidnapped Native and First Nations children, stripped them of their cultures, and, in the worst cases, ended in death and stolen futures. The residential school system and the harm it has caused tribal communities for generations, was a key contributor to the development of ICWA. Mahlea Hunt then drew connection to the current Missing and Murdered Indigenous Women &  Relatives epidemic, and lack of support from the United States in combatting it. Throughout this dialogue, participants reflected on the connectivity of all three topics through a theme of erasure of indigeneity and the ways in which colonialism continues to steal Native bodies in pursuit of land, wealth, and resources.

The final Tohi Talk for Native American Heritage Month, “The Promise of Seeds: Agency, Identity & Sustenance”, will take place on November 29 from 3 – 4 PM. Nathan Peifer from the Office of Sustainability will lead this talk focused on the impacts of settler colonialism on Indigenous foodways as well as current food sovereignty and seed banking efforts, which are reconnecting Indigenous people to their ancestors and healing the land. Register to attend here.